A little treat for you for the weekend :) 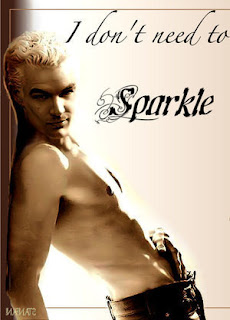 This picture is taken from my Pinterest board gorgeous people in case you need to see more images like this!
Posted by Swirlyarts at 22:58 No comments:

So I have been putting my new found skirt skills to the test and made my second skirt yesterday. As soon as I saw the fabric in an antiques shop in Skipton with Chrissie on Wednesday I knew it was destined to become a member of my wardrobe. Want to see? 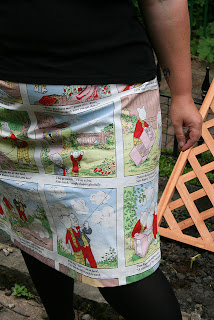 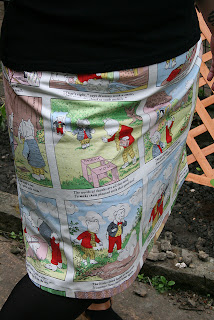 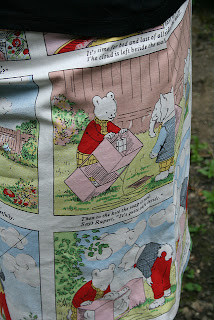 It's a Rupert Bear skirt!!!!!!!!!!! It was a curtain (I've only used half a curtain and there is another one) and it also came with a duvet cover and pillowcase that the girls have already claimed! 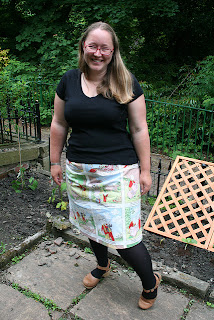 Ta Da!!! I realise it's not to everyone's taste (and I don't think Matt will be coming out with me when I'm wearing it) but it fits quite well into my wardrobe. Now I need to search for some Postman Pat and Star Wars curtains :)
Posted by Swirlyarts at 06:16 9 comments:

You may have noticed that nothing really crafty is going on around these parts at the moment. Nothing major but I do have a case of the CBA's :) I know I have to get stock ready for Country Living in Harrogate in the run up to Christmas and I also have another order which has to be in Sheffield in October but I can't summon up the energy to do anything. 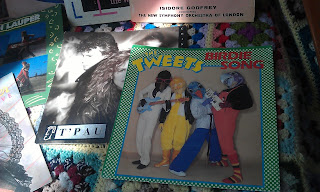 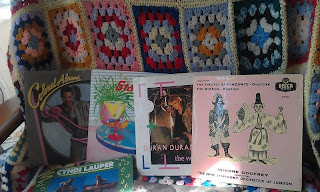 I did sort out these record covers (found in the dining room) and got them out to turn into envelopes but that was at 1.30 and at 4.00 they are still sitting there. Maybe they will go back into the dining room.... Actually no as I have tidied that this morning ready for Tara's craft party next week. Go me being all organised!

I may give up on the envelopes and go into the garden to read instead :)  Hope you are all motivated where you are?
Posted by Swirlyarts at 15:58 7 comments:

So after a couple of weeks evaluating the greenhouse disaster (which I don't seem to have blogged about but it is on Twitter, Instagram and probably Facebook!) we decided to ditch it as it didn't fit the space properly (despite measuring correctly twice and it being checked by Matt) We instead went for these cheap as chips growhouses instead which will do the job just as well and actually fit the space properly! 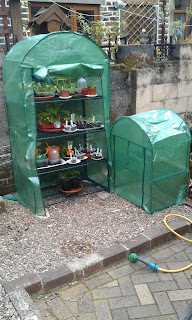 Not the prettiest things but our neighbours clambering rose has fallen onto the big one so I may leave it trailing over it :) 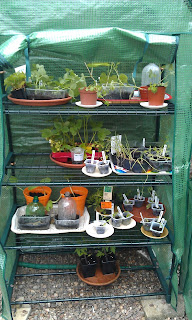 Inside - most of it is still there apart from the peas and tomatoes which were planted out today. 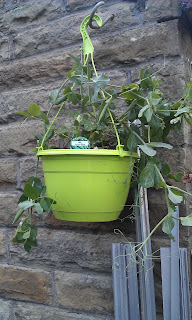 Another addition to the back garden is this hanging basket full of peas from B and M Bargains, £5.99. They also had lots of strawberry ones too. You can see the parts to the greenhouse of shame just underneath. 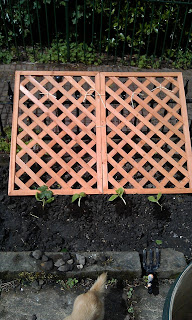 New in the front garden are these pumpkins which I'm hoping will grow up the trellis (the trellis is on the ground nearest to us and it goes diagonally up onto the fence) These were given as seeds to the girls by one of our lovely neighbours so fingers crossed they grow! 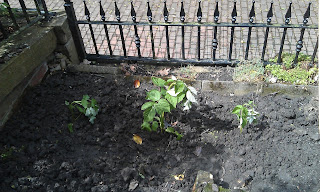 And these are three raspberry canes given to me by another lovely friend Ruth. I had to dig up the plant that was there to fit them in but to be honest it wasn't fabulous and raspberries are fabulous! 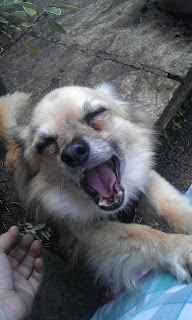 And here is my canine helper. He was actually yawning at this point but lots of people said it looks like he is laughing. Probably at the amount of stuff I still have to plant out! I went a bit seed happy :)

At the weekend I went on a fabulous course run by Rachelle from Ted and Agnes called Skirt Stitchery where she teaches you (very well I may add) to make an A-line skirt.


There I am on the right, stitching away! 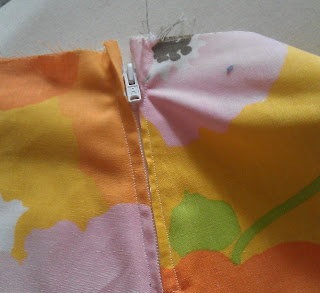 My first ever machine sewed zip :) 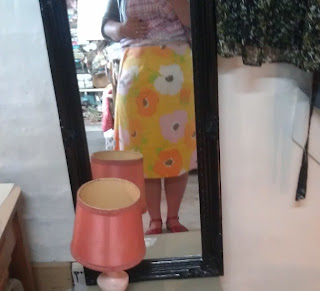 Skirt with no lining and not hemmed but it looks like a skirt!


Eating the delicious lunch provided by Rachelle - it really was yummy and now I have her to blame for a new addiction to Appledore with cinnamon! 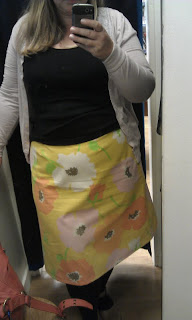 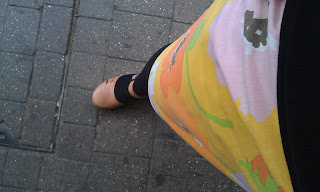 And the skirt out and about in action yesterday :) I already have the fabric for my next skirt ironed :)
Posted by Swirlyarts at 11:55 1 comment:

Email ThisBlogThis!Share to TwitterShare to FacebookShare to Pinterest
Labels: clothes, make your own clothes, skirt

I got a few wholesale orders from being at BCTF and I was thrilled when one of them was from The Imaginarium Gallery in Haworth. I dropped some stock off there last week and it is an absolutely gorgeous shop. 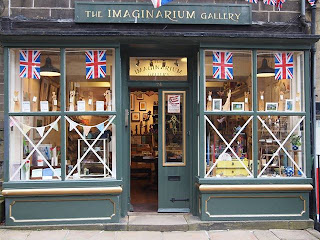 This is the outside and inside is beautiful with a newly opened back room for more goodies! 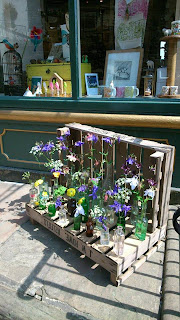 If you look very carefully you can see a pair of chickens in the window :)

So if you are ever in Haworth then pop by - you might just see some chickens!

First eats from the garden!! 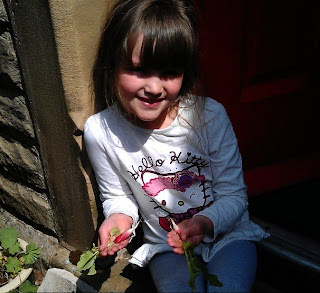 We have our first things to eat from the garden!!!!!! Only two radishes but hey, it's a start! Tara helped me plant them as she adores radishes so my mini gardener was thrilled to be able to pull two up for her lunch. Here's to success with the rest of the garden :)
Posted by Swirlyarts at 06:47 2 comments:

Wow, I did well this month :) Six books read and I nearly finished a seventh but not quite! Here are last months books. 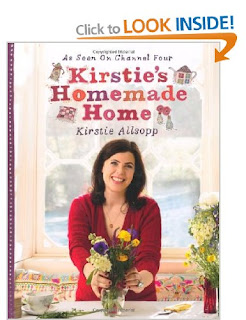 I wasn't sure whether to include this book or not because it is non fiction but I did and yes, I did read it all! I'm not normally a fan of Kirstie's books but I was sufficiently intrigued by this to borrow it from the library. It was ok but I'm glad I got it from the library rather than buying it! 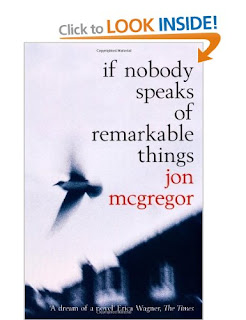 A fabulous book where most of the action takes place over the period of one day and you know that something dreadful happens (due to flash forwards) but you have no idea what it might be right until the moment it happens. It is a very slow paced book and I can see why some readers have given up on it but if you read it in large enough chunks it shouldn't be too tiresome. I enjoyed it :) 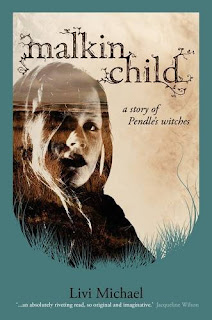 As I live within view of Pendle Hill I have a desire to read lots about the Pendle witches as I know nothing about them apart from the small snippets on the local 'witch buses' that go from Colne, through Burnley and on to Manchester! This is a childs book and focuses on Jennet Device who gave evidence at the witch trials against her own family. Again I borrowed this from the library and will be searching out more books on this subject! 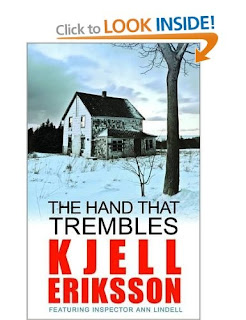 This is another library book (yay for libraries!) I loved the female character but didn't like the storyline of this book. 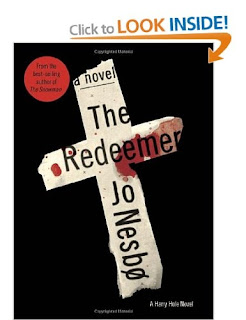 This is yet another library book and the first book I have read by this author. Needless to say I grabbed two more books from the charity shops while we away on holiday! 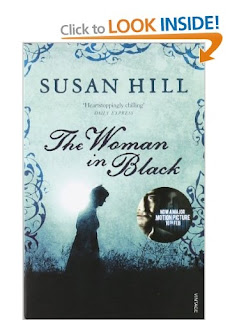 I've been meaning to read this book for years but I just didn't get round to it. It was genuinely scary in places and now I want to watch the film version.