I love making treasuries!! This one features lots of colourful Christmas items from the Crafting In Colour team. 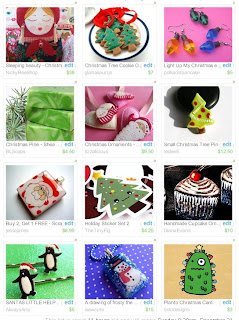 The link is here if you fancy giving it some love and clicks! This is going to be my last blog post until the new year as we are going to be away with no internet connection!! I'm not sure how I will cope but I'm sure I will :) Cuteable will be updated while I am away (pre planned posts) so if you need something to read then head over there. See you in the new year xx
Posted by Swirlyarts at 04:40 2 comments:

These first two are of me that Anya took on Sunday morning - I'm trying not to panic as she is holding my very expensive camera!! 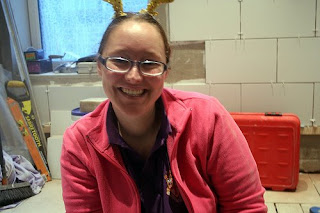 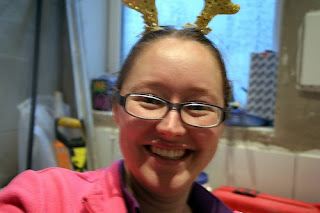 And yes I am in my pajama's (it was Pajama Sunday on Sunday after all!) and yes those are sparkly reindeer antlers on my head. What do you mean you don't normally wear sparkly reindeer antlers on Pajama Sunday?? You may have guessed that we are in the bathroom - don't know how you can tell! I was in there to chat to Matt and I just had to take this photo of him in the bath! 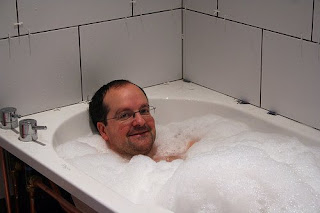 He loves the new bubbly spa bath! I hasten to add that the tiles are now grouted behind the bath and we have been given a provisional finish date for Sat!! 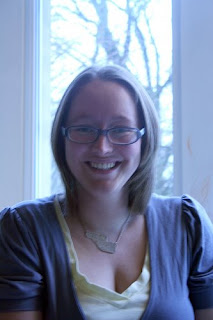 And this is my new haircut - I didn't have time to get a fringe cut in (not sure if I want one anyway!) but I did get it shorter than normal and I love it. I like that it can get messy and not look too bad either which is a bonus for me! 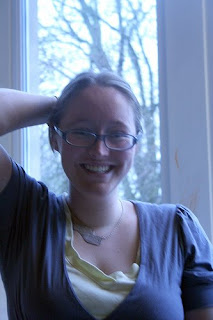 And this is how you will normally see me with my new haircut - up behind my head. I'm sure it is the way for all mums!!
Posted by Swirlyarts at 14:46 7 comments:

You know you are a mother to daughters when...

... you set up a mini hairdressing salon at your kitchen sink for the Barbie doll complete with shampoo (well washing up liquid) mini hairbrushes and a pair of scissors! And that's all I'm saying on the matter!!
Posted by Swirlyarts at 21:57 4 comments:

Feeling a bit crap again - maybe too much info!

Thought I was getting better - but the stomach ache and resultant diarrhoea are back - boo! Also it turns out that I am resistant to the antibiotics I was taking for a urine infection! So I popped back to the dr's and got some new ones and hopefully they will shift it. So I am going in the bath now and then to bed - hopefully I will be a bit brighter tomorrow.
Posted by Swirlyarts at 18:58 3 comments:

Email ThisBlogThis!Share to TwitterShare to FacebookShare to Pinterest
Labels: health

As you can see Anya was very excited about making salt dough ornaments for her teachers! 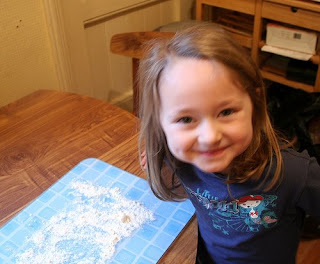 Here is the dough all mixed up - I added food colouring but next time I think I will add more green as it looks very similar to the yellow! 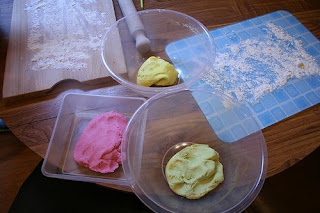 The girls were more excited about the pink though! Here is a shot of the girls in action - and yes they are still in their pajama's as we had a PJ day yesterday! 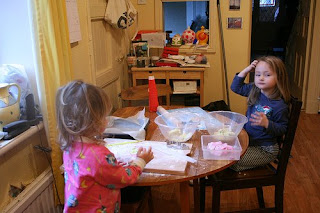 And here are some of the finished ornaments. 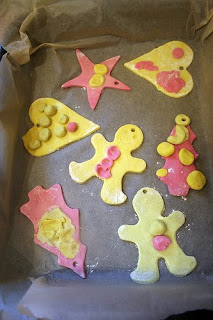 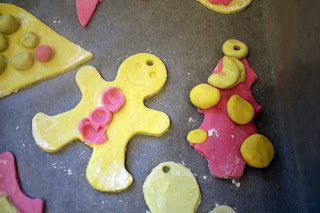 This is before they were baked and afterwards I mixed some pva glue with glitter and coated them in that to give them some shine and sparkle. The recipe I used is here but I would recommend baking them for longer - mine stayed in for nearly 3 hours. So if you are one of Anya's teachers or a special relative then you haven't seen these, right?
Posted by Swirlyarts at 11:32 6 comments:

She doesn't get it from me!

I snapped this photo of Tara doing the pretend washing up! She was actually washing her hands after making salt dough ornaments but decided to wash up - as I say she doesn't get it from me! 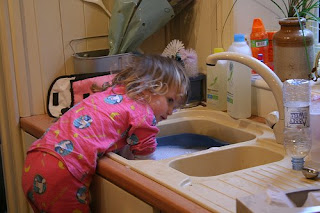 Hopefully I will get photographs of the salt dough ornaments later (they are baking at the moment) and I can show you them. The ones Tara made are for relatives and the ones that Anya made are for her teachers :)
Posted by Swirlyarts at 13:10 No comments:

I honestly have no idea what to write for a title so the one written will have to do. I reached that pppffffffff (read can't be arsed) stage yesterday with the house being a tip, plumbers in and out and not having a decent bathroom. My creativity has gone out of the window (the one that the plumbers insist having open!) along with my motivation so I have closed all my shops for the Christmas holidays. To be honest I don't think people would be ordering things now so I have decided to take a break from it all - yes it does happen occasionally! The shops will be opened again in the new year with some items offered on sale as I won't be continuing with some lines in the shops. I'll hopefully get a chance to revamp photo's and generally have a decent clear up of all the shops. We are going away for the holidays next Sat so have presents to wrap, clothes to wash and a house to try and rescue from the dust and muck this week.

I will be posting a few things this week but then once we go on holiday I won't be back until the new year - hopefully feeling refreshed!!
Posted by Swirlyarts at 09:11 4 comments:

Yeah - I'm in a treasury!! Thanks to I Heart That! Dance 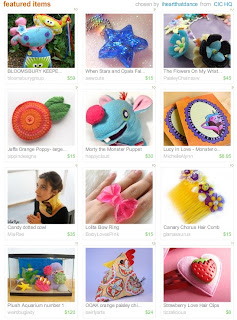 You can visit the treasury here and my OOAK chicken doorstop here.
Posted by Swirlyarts at 07:27 1 comment:

A strange title I know but you'll see what it is about in a minute. I couldn't resist temptation today and after we had picked Anya up from school we went to the lovely crafty place that is Sams, my local scrapstore. The title refers to this Cropper Hopper Photo Case which you can see below. 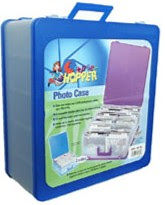 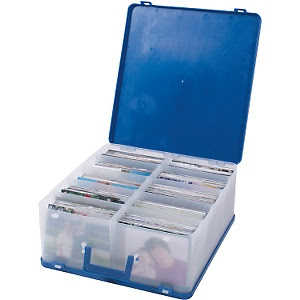 And yep - you've guessed correctly that they had some in Sams and it was included in my £5 bag!! It's quite large and will fit 12 x 12 papers in the bottom half of it. There were pink and purple ones to choose from and I think I got purple (can't be bothered to move and check!) The only fault is that some of them had been bashed on the edges or part of the clicky bit to close it was missing but not enough so that it still closed. Bargain! I'm writing about it tonight as there were 4 or 5 left and I thought that crafty friends might like to know about it as they are members of Sams too (and it was one of the lots that you are only allowed 1 of so I couldn't grab one for you guys!)

Of course I got some other bits and bobs but my stomach was hurting and I didn't rummage as much as usual. Have to plan a trip back for after Christmas!
Posted by Swirlyarts at 18:50 1 comment:

Well it has cracked on a fair bit since I last posted - we now have a bath!!!!!!!! I don't have up to date photo's due to being ill but I will get up there later to take some. Here's how it has progressed so far. 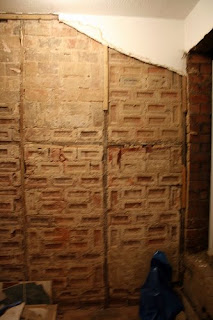 This is the wall behind the toilet! 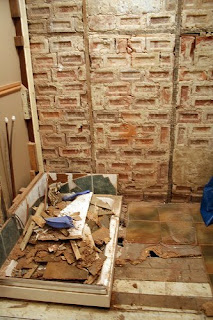 The shower tray with the remainder of the tiles in it! 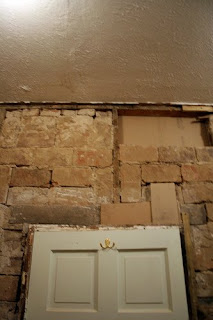 This is the wall that the door sits in - more on this wall in a minute. 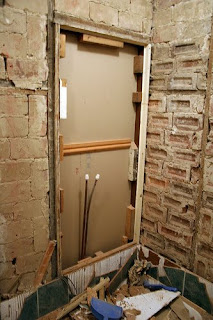 This is what was hiding behind the shower - an old doorway. We knew shortly after we bought the house that it was bodged in places but we didn't realise quite how much until we started the bathroom. The old doorway had been patched up with bits of marine plyboard, odd bits of wood and brick and newspaper! And not only that but the two doorways (old and new) was the only thing holding the wall up - the plumber pushed on the wall and it moved which was a bit scary. You can see some pictures of the dodgy wall below. 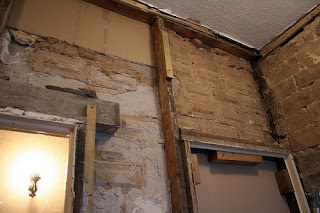 And below is what the wall looks like from the hallway. 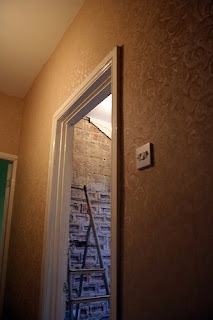 And this is what it looks like when it is demolished to build a brand new wall! 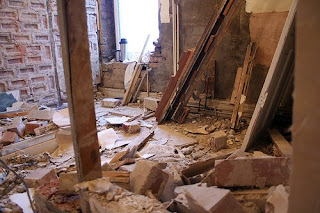 I'll hopefully get more up to date photographs tomorrow!
Posted by Swirlyarts at 13:14 5 comments:

Email ThisBlogThis!Share to TwitterShare to FacebookShare to Pinterest
Labels: bathroom

Well I'm feeling a lot better but that's only about 80% of where I am normally so I'm hoping the 20% will come back soon :) My shops are still closed at the moment but hopefully this week they will be opened again - bit of a rubbish time to get ill in the run up to Christmas but hey ho! I'm also liable to be feeling sorry for myself this week as Matt is going back to work :( so any amusing things to tell me will help me feel better :)

The lovely Kitty Kent featured me in one of her treasuries - a pantomime theme! So you can see my Peter Pan envelopes in the treasury :) 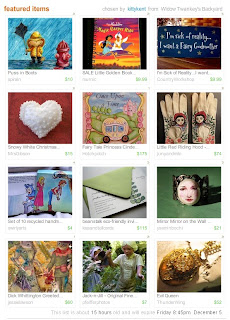 I have closed my etsy shop for a little while to try and get over this stomach bug. I'm hoping to have it re-opened next week sometime :)
Posted by Swirlyarts at 10:51 3 comments:

Email ThisBlogThis!Share to TwitterShare to FacebookShare to Pinterest
Labels: treasury

You can tell when I am busy because these owl videos keep popping up!!

Back tomorrow hopefully with more exciting posts!
Posted by Swirlyarts at 17:06 No comments:

Is a wonderful superstar :) He's made me a fantastic new website and here is a screenshot of the front page!! 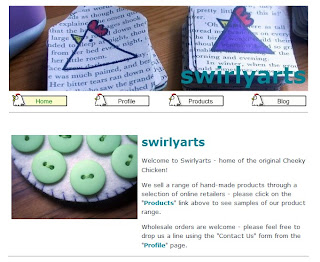 Can you see the little white chickens underneath the header banner? If you hover over them they cheep!!!!! Yep they really cheep :) And you get to see a lovely piccie of me on the profile page and some photo's of some of the products I make.

Oh and the best bit is that it is all on my new domain name swir.ly Matt loves the geekiness of that :D
Posted by Swirlyarts at 19:43 3 comments: 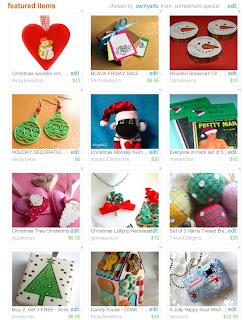