I tried making banana cake before and the whole thing turned out very, very wrong. I know because my friend Alex makes delicious banana cake (and any other cake too actually!) and mine was nothing like hers! So I'm biting the bullet and trying again - I found this recipe on the Oxfam site and I'm going to make it tomorrow - once I been to Asda and bought eggs! I'm not sure about the whole banana thing but I will see.

Also tomorrow is the 'leaving do' for Ladyfort - I 'know' her through Flickr and she makes the most gorgeous handbags. Anyway, she is having a virtual leaving do here so I thought my banana cake might come in handy for that along with my little teacups! I'll post piccie's here tomorrow.
Posted by Swirlyarts at 19:43 No comments:

.....is to try and post something on here every other day! I've been managing maybe a couple a week so I am going to try, in June, to post every other day! Hah hah hah hah - who am I kidding??
Posted by Swirlyarts at 11:41 No comments:

Not that the two go together really but I just had to show you my pile of ironing. You can tell by that and the mess in the front of the picture, that I am not a domestic goddess!! Doesn't Anya look cute though? She is there to show the size of the ironing pile - although she is quite small for her age - any excuse hey?? 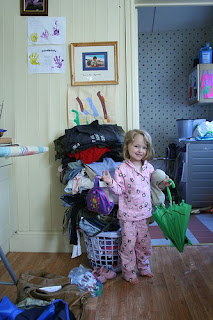 There's another photo on my flickr stream with notes! Click here to see it. I had a really nice day yesterday shopping with my mum and I found these little gnomes in a charity shop. They were going to be for my sister but they wanted to stay and brighten up my plants instead - sorry Sarah! 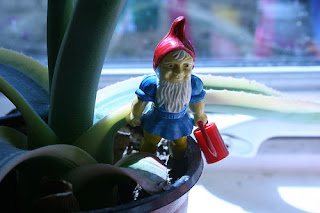 And his friends here - the chef came with the gnomes but the other guy was in a cocktail I had in Cyprus - I collect rubbish wherever I go!! 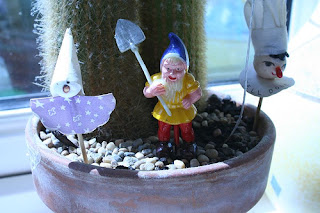 Posted by Swirlyarts at 11:23 No comments:

I think I've figured it out! There is a filter on the front of the lens which Matt forgot to tell me about! It's not only that though - I played around with the light settings on the camera and I think it worked - here's a picture for you to judge. 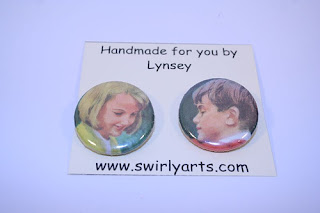 This has been a problem of mine for a while - how to get the perfect photo of your crafts. On a forum I belong to we have been discussing light boxes and if they work. See the exact thread here. Some one suggested using a light box but I had a look and they are quite expensive so I had a search and found this tutorial on how to make your own light box - it's very simple and inexpensive. Here is a photo of it set up in my study. It consists of a plastic storage box, two clip lights bought from Ikea, poster board and a white pillowcase. 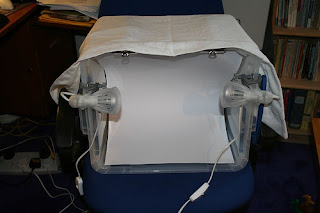 I decided I need to brighten up the photos of my stuff on etsy, in particular, the photos of my Peter and Jane badges. They look okish once you click through to them but I would like them to be brighter on the front page of my shop so that people can see what is there rather than going 'Huh, what's that?' I've not yet got the hang of it though - I'll show you in these examples here!
This is the original photo on Etsy of one of my brooches. 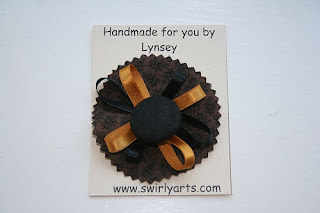 Here's the one I took in the light box with the two clip lamps on and no flash. 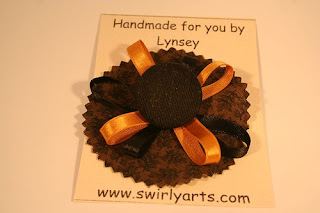 Apart from it being wonky it is very pink - it didn't look like this on the preview on the camera! The next photo shows the same brooch in the light box but with the flash on. 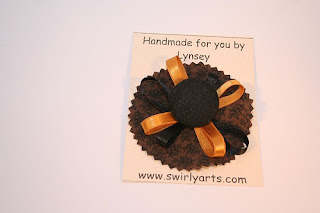 It still has a pink tinge to it but it looks so much better with the flash on - perhaps I need another light? This looked far too bright on the preview though which is why there is no close up photo! I think I will have to keep practising.
The Peter and Jane badges look better - even if they are a little pink tinged! I'm sure that if I keep practising then I will get better - I think I'll take some more photo's tonight. 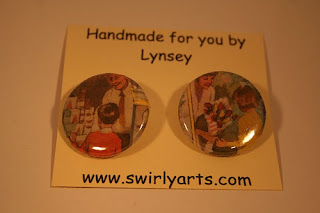 Posted by Swirlyarts at 16:02 No comments:

I went on a trip to Ikea yesterday for two clip lights and the bulbs that go into them - I ended up spending over £100!! Why does that always happen in Ikea?? I bought loads of fabric (of course) and bits and pieces for the craft fair although it's not actually until October! Anyway, I spotted a trolley full of fabric in bargain corner but none of it was priced so I waited until the guy was free and I'm so glad I did - lots of gorgeous bedlinen for £4.50 a bag!! The bags had a couple of duvet covers in them with a few pillow cases too - for £4.50. As my friend Alex would say, 'It can't be done!'
Here's a piccie of the pile of material I bought from bargain corner - I bought loads more but it's already in my craft room and I can't be bothered to go and get it to photograph! Here are some coasters I have made for my friend for her birthday - so Nicola if you reading this don't look at the next picture! 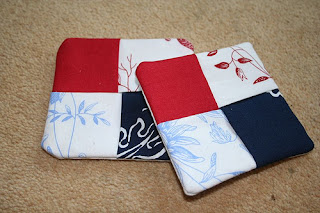 Posted by Swirlyarts at 21:22 No comments:

The next cheeky chicken

I've finally got round to making another chicken doorstop - well I had to really as it was a commission order! Maime, who works with my mum, requested one and left it up to me to decide which fabric to use. I've been hording this fabric for a while - it came off a bag I never use - and thought it would be perfect for a chicken. I have used a little bit of it before here. It's a type of oilcloth so is quite hard to sew especially putting a zip in which I find quite tricky anyway! It was good in one way though as I didn't have to put any rice in it to take the photo. 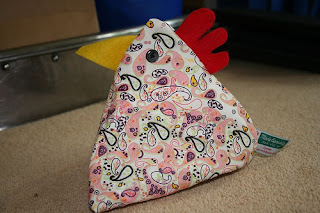 I do have lots of pieces cut out for more chickens so hopefully I will be getting more made soon and up onto Etsy.
Posted by Swirlyarts at 16:51 No comments:

I said I would post up some more pictures of the stuff I bought from reprodepot and here they are! This sellotape type stuff is brilliant - it has such cute little figures on. In the photo you can see the frogs - they are sheltering from the rain - and the pigs and ducks. 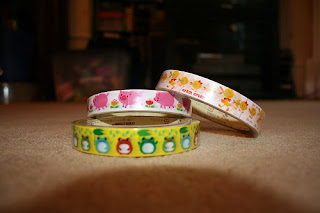 Gorgeous ribbon I couldn't resist! They do matching fabric too but they had sold out of it all - boo. I'll just have to place another order then! 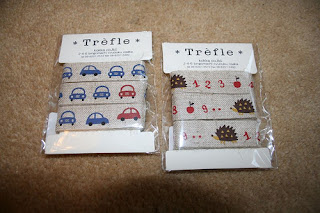 I nearly jumped for joy when I saw this fabric come out of the offcuts pile - it is perfect for my mum! There isn't enough to make her a bag so I might make a plain cotton bag and use the material as a pocket on the outside or I might be brave and make her a purse - can't decide which yet. 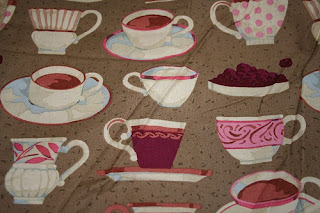 This next fabric I think I will use for the girls but not quite sure how yet. I like the stuff at the back - I might expand on the chicken doorstop idea and just make plain ones but I will see. 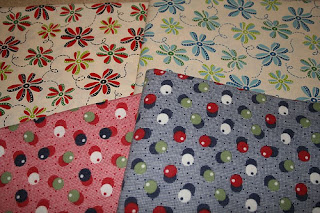 This last fabric is the piece de resistance (my French is appalling). As soon as I saw chickens I had to buy it. Ever since I started making the chicken doorstops I have felt compelled to buy things with chickens on. I bought some little wooden chickens the other day to stick onto cards. Anyway the fabric........ 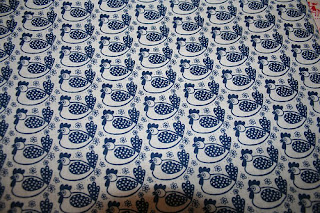 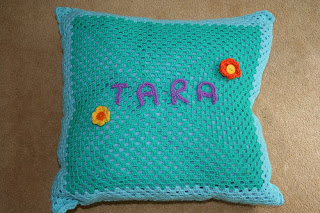 I love this pillow that my sister made for Tara as her Christening gift. The colours are great and I love the little flower details. I'm going to try and persuade her to make me some little flowers so that I can turn them into brooches!! How great would they look pinned in two's onto a jumper? 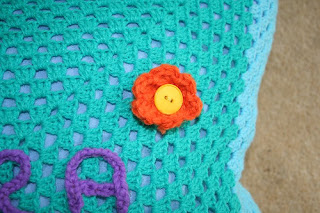 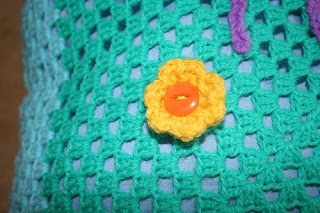 Posted by Swirlyarts at 16:05 No comments:

........reprodepot?? I ordered lots of their fabric at the end of April and it has just arrived today!! Obviously I couldn't get it out of the box until the girls had gone to bed but as soon as they did I pulled it out into my hot little hands (I'd obviously washed them first though!) So big pile's of fabric - this next bit is just going to be lots of photo's... 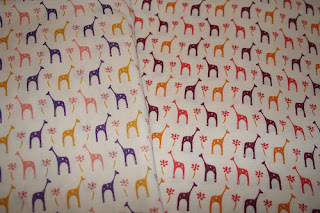 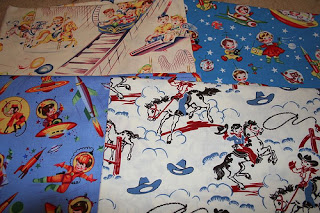 I'm not sure which of these is my favourite - I really like the ones on the right hand side. 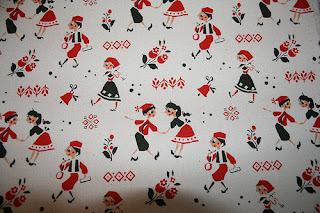 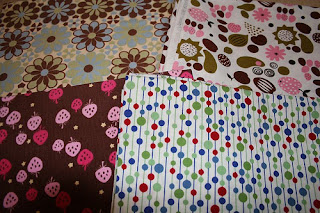 The flowers and strawberries on the left are corduroy - yummy!! 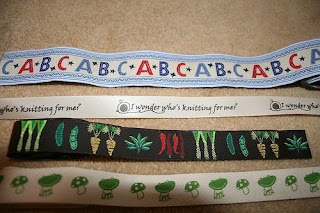 Some very cute ribbon that came today too, also from Reprodepot. Funnily enough, once I had placed my order I went to look at Some Girls Wander and this post shows that she likes knitting ribbon too! I must have good taste!! Seriously though go and look at her blog because she has great clothes and fantastic style - oh and she is also a fellow crafter and does some great work. Check out her main blog here.

I will try to do another reprodepot post soon but it's nearly bedtime now!!
Posted by Swirlyarts at 21:01 No comments:

On Sunday of the bank holiday weekend we had Tara's Christening. I would like to say that weather wise it was gorgeous, but it wasn't!! It didn't rain but it was very cold and windy - as you will see in some of the photo's. We had planned to go outside into the garden to have drinks at Pat and Owens as we did with Anya's christening but it was just too cold, so we stayed inside at Church House! Here's a picture of Matt, Anya, Tara and I with the vicar in church. 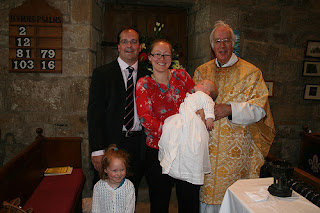 I really must learn to push my glasses up when I am having my photo taken - half of the pictures have me with my glasses over my eyes! I'm just posting a couple of pictures although Matt took 140! It would be a very long post if I included them all! 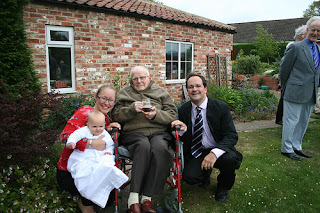 Here's one of my favourite photos from the day. It is Auntie Nic, who is also Tara's Godmother, Uncle John and Tara. Check out the cheesy grins - and look at Nic's hair - you can tell it was windy! 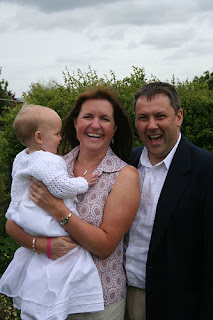 And the last photo - for this post anyway! It shows that Tara wasn't getting all the attention. And doesn't Anya know how to pose! 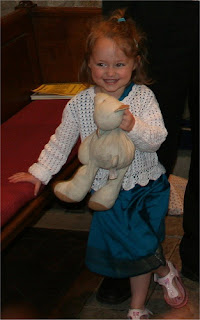 Posted by Swirlyarts at 09:19 No comments: