I have been sewing some more Christmas trees but this time they have a bit more bling! 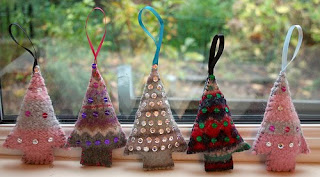 I LOVE the middle one but it took an age to sew! Looks pretty though :) 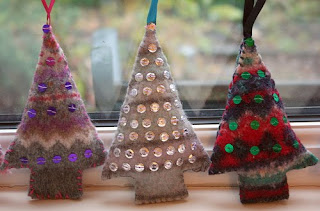 And if you follow my Twitter you will have seen that I have been sewing paper this week. I tried following this pattern which is meant for fabric but obviously paper doesn't bend as easily as felt and it didn't turn out quite right. 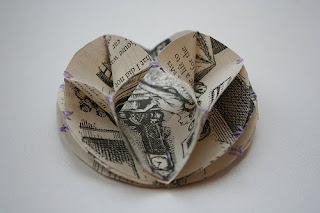 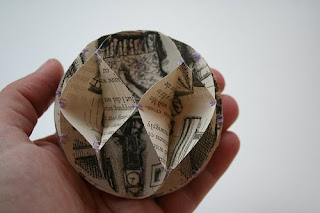 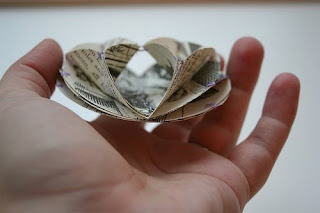 So I have half a sphere decoration which I might finish off with another half sphere but we will see. I have visions of some more of these made out of newspaper but huge to hang in my window as Christmas time - I will just have to remember to use more circles! 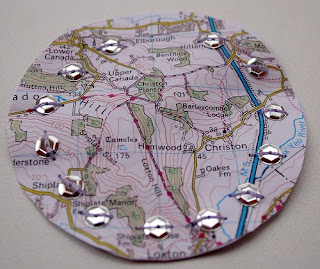 And I had made these double sided map circles to make some more of the sewn paper ornaments but I decided to use them for these ornament type decorations. I'm not sure how they will turn out but I will have a further play later.
Posted by Swirlyarts at 11:02

the trees look so pretty lined up like that :D

Christmas trees are very cute, i've done the same kind of things for my living-room.

And about Christmas, i'm doing a little giveaway on my blog. To enter, here it is : http://thefrenchfrogtouch.blogspot.com/

I am really loving the christmas trees.

The balls so remind me of some paper christmas trees my grandad used to hang. I think they would look lovley two connected together

made with love said...

Oh your little tree look really sweet. What a great idea, how do you stop the wool from fraying after you have cut them out?

Your trees are wonderful!!

I LOVE!! the trees!! The dark red and purple is my favorite :) These should do exceptionally well!

Ooooh, I love the Christmas trees. The stripey one is my favorite.

As for the paper ornaments- genius. I really really love it. I can see you making a tonne of these in all kinds of different papers.