I have been busy!! These 4 ACEO's were all made yesterday although one had been partly made for months now! 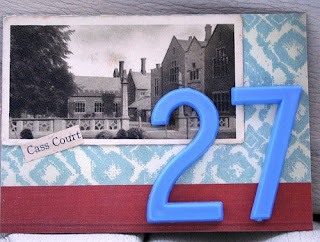 'They lived at 27 Cass Court' is the one that was partly made! The image of the mysterious house is a cigarette card and the wording has been cute from an antique book (a damaged one that the charity shop couldn't sell I hasten to add) The numbers are from an educational game from the 1970's/1980's. 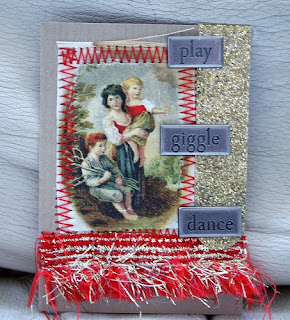 Another cigarette card has been used in this ACEO entitled Play, Giggle, Dance. This one is a silk cigarette card though so it has been sewn onto the ACEO. I also wanted to bling it up a bit hence the glitter strip down one side.

And these 2 are the first in a new series of ACEO's entitled Weird Plants. I have 2 others planned but I just need to get them made! I'm very pleased with these and have lots of other ideas for the Weird Plants series. I'm sure you will be the first to know :)
Posted by Swirlyarts at 20:28

OOOhhhhhh!!! Do I recognise the fringy stuff?! I do like these and the little drawings are very cute! I want more!!!