Not your average tourist photographs!

We went to Paris for our 10th wedding anniversary this year and once we had dropped the bags off at the hotel we decided to go for a walk around as our hotel was only a few streets away from Notre Dame. We walked along the Seine for a bit to the end of the Isle Saint-Louis and sat opposite the very end for a bit to watch the tourist boats go past. 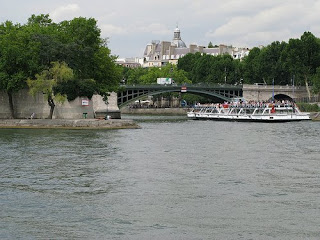 Very pretty. We then spotted a man who had stripped down to his swimming trunks (it was stupidly hot and sunny) and he laid down. After about 30 secs he sat up, looked around and whipped his trunks off! He can't be nude we thought - he's in the middle of bloody Paris with tourist boats going past every few minutes and he has people sat right behind him! It only took a couple of photographs to reveal that he was indeed naked! I cracked up when Matt exclaimed 'I think that one is a cock shot!' And it was - and here it is! 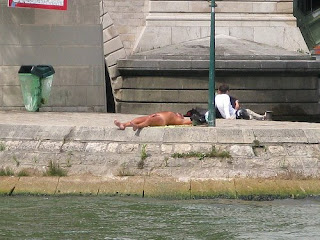 I urge you not to look too closely!! 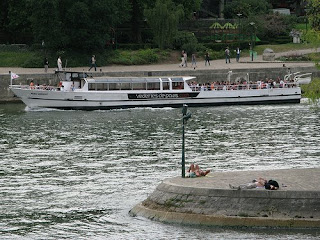 And there he is at the end of the isle with a bloody huge boat going past!! He's lying next to the post in case you can't see him - at one point he was lying with his legs spread! 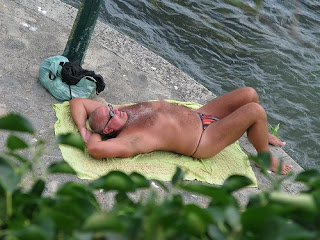 Unfortunately after we had walked round to where we could get a better view (!) he had put this rather fetching posing pouch on. We weren't the only ones to see him as when we got round to the point above him there was a giggling girl of about 9 and her dad taking photo's too :) A rather unusual start to our hols!!
Posted by Swirlyarts at 06:33

That is so funny - and very French too! Reminds me of the time we took my mum to France with us, and there she was on the beach, cigarette in one hand, glass of wine in another. Up comes a french chap - asks for a light and promptly unzips his trousers and wee's - whilst he's standing chatting to my mum. Hubby and I were in hysterics - Poor mum looked mortified!

I hope you had a wonderful anniversary and holiday and congratulations to you both too.

Hehehehehehe!!! Only in Paris eh? I bet he wouldn't be that brave in Blackpool!!

lol I didn't see any of that when I went back home! It was obviously your lucky day!!

Fantastic! Sounds like a fascinating holiday from start to finish! Glad you had a lovely anniversary break.

Word verification is 'outside' - how odd, hehe!

OMG I laughed so hard when I saw this we were in Paris last month and didn't get to see something this funny....they do say that the french are liberated fellows, a little bit too much sometimes me thinks :D thanks for cheering my day up. x

Ooer - well the sights you see!! Don't you think it's the joy of digital cameras that you can take this snap & you don't have the counter staff at boots sniggering at you as you collect your developed pics!!!

My word verification is bersa - which indeed he was a bare sir!! It is odd...

he he! Very funny! Hope no school trips went past on the boats = eek!

That's hilarious! It's what life is all about! Seeing the sights and all that. What's funniest is that you mooched all around the river to try to get a good shot! x

ooooh that made me laugh.

Europeans do seem to have les inhibitions. When i lived in Berlin in 1970 as we got off the under ground train load sof men dashed to the nearest tree for a wee.

The walking through the park one day another man just stood and weed by the path. I was a naive 20 yr old at the time

Funny and very Euro :) I bet he has a very good self-esteem :)

I used to live in Paris (11 years ago - I feel old!) and this post brought back memories. I remember watching the Scotland-Brazil world cup opener on the big screen at Hotel de Ville and seeing an elderly French lady 'encouraging' the men in kilts to lift them up. Ooh la la indeed.