There has been a little bit of tension in the Swirlyarts household recently - not from the human members mind you, but from the chicken fraternity. One little pincushion, named Mr Beige, has been a little disgruntled with the attention some of the newer and fancier chickens have been getting. I have tried explaining to Mr Beige, that because he was one of the first pincushion chickens I made, he will always have a special place in my heart but he refuses to acknowledge that. 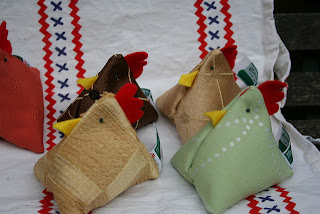 Mr Beige pictured in happier times - he is the one at the front next to Mr Green.

So to win yourself a grumpy fed up lovely little pincushion chicken then all you have to do is suggest a new name for Mr Beige. Mr Beige himself will preside over the name giving and will help to choose (with the aid of a random number generator) his eventual new owners. He has decided that his new owners will be announced on Sunday 3rd October (he is quite bossy too - be warned!) so you have until midnight on Saturday 2nd October to think up a new name. Feel free to tweet about it and tell your friends :)
Posted by Swirlyarts at 06:05

Well I have to agree with Mr Beige, he certainly has a rubbish name and he needs to get down to Deed Poll quick smart. If he comes to live with us he will be known as 黄金の羽さん  Feathers of Gold-San and he will have no chickeny competition here although it is a house full of Ebi's (shrimp)

I agree with Mr Beige as he needs a name that celebrate his status as the first of his kind, so I'd give him the name Champagne Charlie and if he were to come to live at our house he would have Biker Ben the Meerkat for company and together their uniqueness would be celebrated on daily basis.

Alice thinks that Mr Beige looks very nice and deserves to come and live with her and CuddleBunny, in a flat with lots of weetabix and flapjacks. She would like to call him CuddleNum.

Eastwood, my rescue pottery chicken would love to have a new chicken friend. He's the only chicken in a house full of cats and humans. Poor Eastwood was abandoned by his previous owners on top of a recycling bin in Eastwood park all chipped and dirty. He thinks Jeremy would be the perfect new name for Mr Beige and he will let him be as bossy as he likes.

I think Mr Beige is very cute and would LOVE to come and live with me and my tribe. I think a huge change of name would be very disturbing, so I would call him (as he is) Buff!

On fancy days he could be Buff-egg the vam-pin stayer.

In the meantime while I ponder on a name - I have linked to your post on my Facebook Page...

No other chickens here, they are all next door clucking every morning and wandering about eating bugs. So Mr. Beige would be quite welcome if he would not mind sharing a bit of space with Nuts the squirrel and Chaucer the cat. They discussed it and would welcome him with open arms and thought Lord Cockadoodle would perhaps be a wonderful name...if Mr. Beige approves that is.

I think he is very sweet and would love to come live in the country with me being known as Rusty the Rustic Chicken. He would rule the roost.

I happen to like beige and think he's a perfectly cute little guy. The beige makes me think of khaki jungle gear, so I'd have to name him Safari.

Ah, I'd go for Mr Oatso as he looks a bit Oaty. And nuts.

He can live next to Whoops the larger Chicken near my pc!

In honor of his attitude and big ambitions, and the way that he keeps his look simple but lives boldly inside, I would name him Clint Eastwood. And Mr. Eastwood could pick all sorts of battles in my home if he wants to. We like angry tough guys here. And there are no fancy anythings allowed.