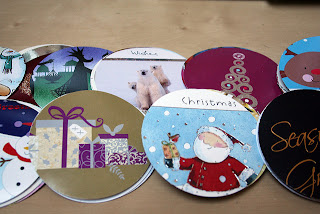 I normally use our old Christmas cards to make gift tags for next year but we already have a huge bag of them and didn't really need this years adding to that pile! So I was really pleased when I came across this tutorial that I had saved a while back about re-using your Christmas cards for a garland. I dug out my trusty circle punch and punched out all the cards that were big enough to fit in the punch - the smaller ones were added to the tag bag for next year. 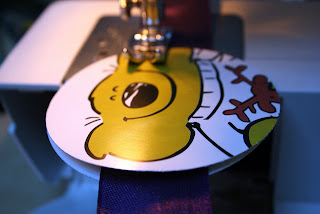 The tutorial tells you to glue your circles to the ribbon but I wanted something that would last being thrown in a box year after year so decided to stitch them to the ribbon. I also put two circles back to back so if the garland twists then you still have pretty things to see! 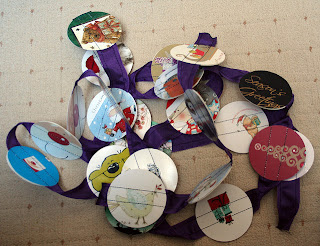 Ta Dah! The finished garland. It was very quick and easy to do as well and you can obviously make it as long as you like. I just used up what ribbon I had. 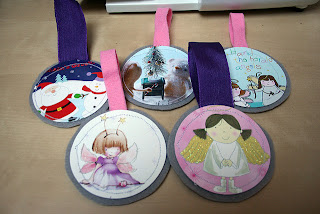 I then had some circles left over and decided to make little ornaments with them - again very simple but quite effective. They are simple felt circles with felt offcuts/ribbon sandwiched between the felt and card and then sewn.
Posted by Swirlyarts at 06:04

Email ThisBlogThis!Share to TwitterShare to FacebookShare to Pinterest
Labels: recycling, tutorial, use what you have

That's such a cute idea! I really need to invest in a circle punch - they look so pretty.

Oooooh pretty! Hope you had a lovely festive time with your family - all the best for 2011 :)

They look great. I am the same as you; so many old Christmas cards, in fact I am sending an envelope-full to Milomade tomorrow in my attempt to tidy ;)

Vintage from the Village said...

What a great idea, perhaps I will go and rescue ours from the recycling bag ! he he !