Once a month (roughly) I go to a craft meeting in a nearby town which is great fun. This week we had two demonstrations alongside our usual chatter and craft time. One was sugarcraft which isn't really my cup of tea so I didn't watch that one but the next one was screen printing which did interest me! I have done a little screen printing before (at school) but not much and I couldn't remember what to do! I had thought about screen printing one of my chicken designs but I really couldn't get my head round what needed to be cut out and what needed to stay so I opted to use a ready made screen instead. 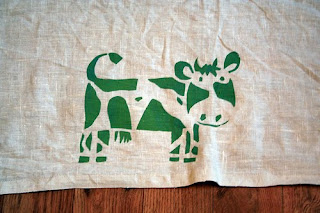 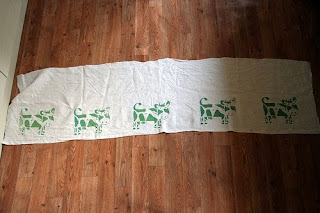 I printed a length of fabric that I might turn into a skirt for Tara if I get round to it! It might just sit on my shelf though instead!

We had several new people at Fuse this time and one of them was a lovely lady called Eileen who is an artist. Anya had come to Fuse with me as she was off school with a dodgy tummy (although you wouldn't have guessed with the amount of running around she did!) and Eileen asked her if she would sit for a portrait. She duly did and was presented with her own portrait at the end of the session (she sat for about 45 mins in total) 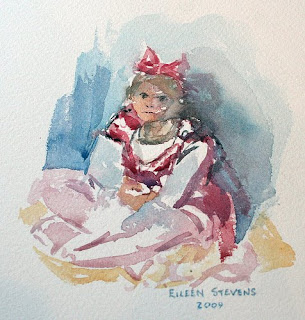 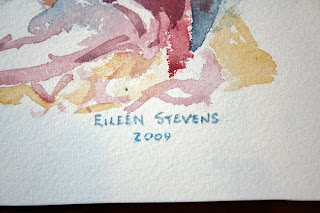 Anya is thrilled with it and so am I actually. She made sure she went round everybody at the meeting and showed them the portrait :) We are going to get a frame for it so it can go in her bedroom. Eileen wouldn't take any money for the work although I tried to give her some so Anya is going to make her a card to say thank you - I might throw something in for her too :)
Posted by Swirlyarts at 20:18

aw how sweet, what a lovely portrait that lady did for anya :) a definate keepsake xx

that was really nice of her to do :D and great that Anya is going to make her a thank you card :)

I'd probably end up making a bag out of the cow fabric, it looks good :)