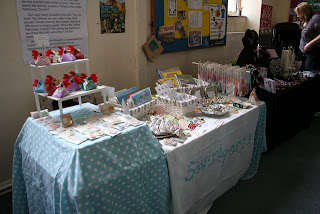 This is what my stall looked like! There were only 10 stalls in the church as we were in the room at the front. There were cups of tea and cakes too which were yummy! 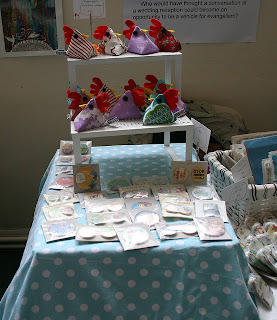 The chicken pincushions and badges. I normally have more chickens than this but they have sold really well recently and I haven't had much chance to make more! 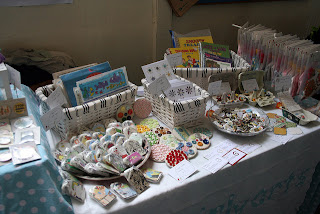 More goodies on the stall 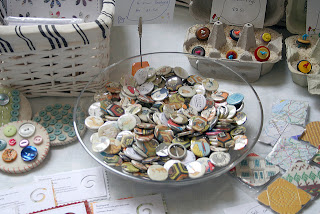 The bowl full of mini buttons - these were rummaged through quite a bit :) Kids were also attracted to them and it worked at keeping them amused while parents looked at my other goodies! 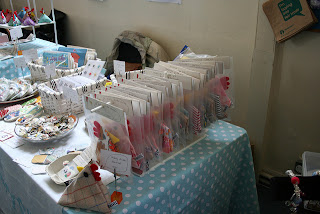 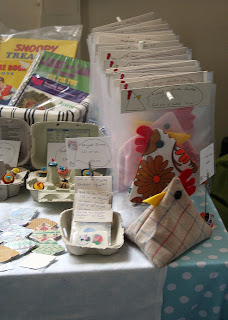 And here is the new chicken packaging - lots more people looked at the chickens this time and could easily see what they were. People also liked picking up Terence the display chicken which is good. Next time I need a bigger price tag (or to move it) as people kept asking how much they were :)

I didn't make my stall money back BUT it was the first fair that 'made it' had done in Clitheroe AND footfall was very good so I will try at least one more with them. It's so close to home too which is always a bonus. Lots of people were asking when the next fair was too. I also handed out about 100 business cards so I need to make more this week!
Posted by Swirlyarts at 08:33

I love those chickens! Wishing you lots of luck with the next fair. :) x

Love the new packaging for the chooks!
I nearly had a heart attack today - my door chook went missing while I was babysitting. One of the twins had decided to play with it, and I found it hanging out in my bedroom!

Love the spotty stall! Your display all looks fab too, and great idea to 'flat pack' your chickens!
I love Clitheroe...great charity shops and an amazing old bakery that sells HUGE bakewells! :)

OOhh - do like the new packaging! And I know where the church is too as its just down the street from the old KS!! Good luck next time at the fair!!

Looking good! Good luck with the next one.

Your stall looks amazing! Well done :) And something about flat-pack chickens is very amusing...