Anya drew this picture of Henry the other week and asked if I could make him into a plush. I said that I probably could but I didn't have time until yesterday. 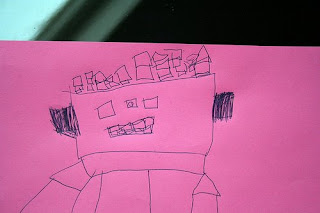 I started it after lunch and when Anya saw him she wanted a few modifications! 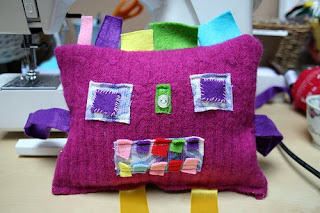 She was happy about the lack of ears (good job as I had forgotten them!) but was not happy about the hair. She wanted more squares on top of the squares that were already there and we had tears when I told her she couldn't! You can clearly see them in the picture but I couldn't translate it to the actual object. 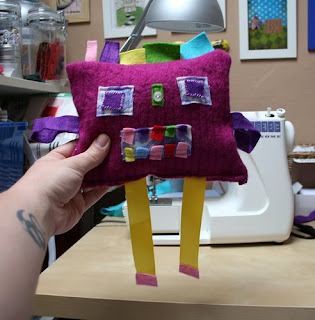 She liked his legs but wanted pink shoes for him so he got some (they have to be square or rectangle as that is his name Mummy!) and I also added arms. Again different from the ones in the picture but she was happy - I'm toying with adding a button at the ends of the arms but we will see. 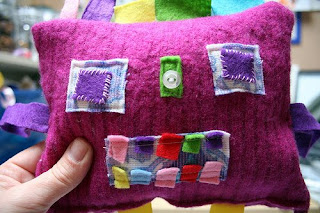 And she loved his teeth - he has his mouth open like that as he is at the dentist! I also added other bits to his eyes.

So for an afternoons work I have a happy Anya and there is also a happy Mummy as I got to use up more of my stash - oh and it's all reclaimed/recycled stuff too :)
Posted by Swirlyarts at 09:36

Email ThisBlogThis!Share to TwitterShare to FacebookShare to Pinterest
Labels: Crafts, Daily musings, girls, use what you have

Oh lovely! Anya has a great imagination and a lovely mummy. I bet you had great fun.
I must do that with Mary.

He certainly has a winning smile! How lovely for Anya - she's very lucky x

He's so sweet! What an amazing job from sketch to softie.

Fantastic!! Do you want any jean material?!

What a lovely thing to do. Mr Henry Square-Smith is fab!