I'm busy at the moment working on a wholesale order - nearly half done and it needs to be sent off at the end of this week/start of next. I'm hoping that the postal strikes aren't going to happen again this week although I do have the option of delivering it myself if it comes to that! I'm going upstairs in a sec to sew some more and I'm hoping that Tara likes being up there - tough if not really!!

Here's a couple of exciting things that happened at the weekend - we went out to lunch at Pizza Hut! Not superbly exciting but it was nice to go out, and of course I got dressed up! I've joined a group on Flickr called 100% Thrifted and as you might be able to guess from the title, your outfit for the day has got to be 100% thrifted - apart from underwear and socks/tights. I can't really do it during the week because I am rubbish at taking photo's of myself with timers or in mirrors etc so it's going to have to be left to the weekends when Matt can take photo's. So anyway here is my 100% thrifted outfit! 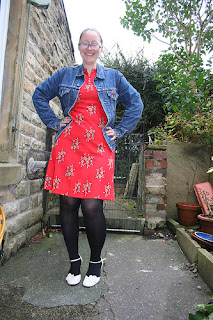 The dress is from a charity shop in town called Only Foals and Horses - I saw it on the rack and squealed out loud. And it was only £2! The jacket was given to me by one of my housemates at uni - she was throwing it out but I wouldn't let her! The shoes were from my friend Jennie and they used to belong to her mum. Her mum wore them to a garden party at Buckingham Palace so my shoes have been in the presence of the Queen!

My second bit of exciting news is that I got into another treasury over on Etsy! It was a thank you treasury done by Shunklies - I bought one of her items in the past year. It was actually my first item purchased on Etsy! Here is a screenshot I captured and of course it has gone into my Etsy treasury group on Flickr!! 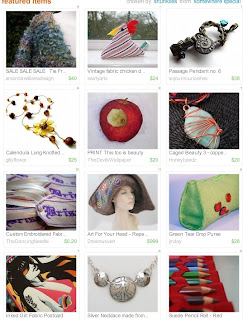 Did you spot the chicken?? Off to sew now so hopefully there will be some pictures of finished stuff soon!
Posted by Swirlyarts at 09:13

Hehehe!! Love the dress! I went to McD's this weekend!