Matt loves Star Wars and I knew that for one of his birthdays I would have to make him a Star Wars cake - so I did! 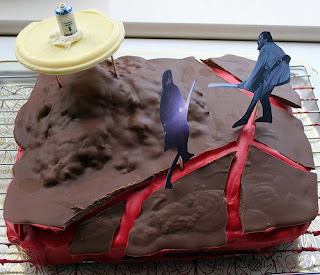 This is the scene where Obi Wan and Darth Vader (although only the Emperor call him that at this stage) are fighting on the volcanic planet Mustafar. Obi Wan taunts him by still calling him Anakin and he gets a little annoyed at that! The land breaks up and reveals the lava beneath and R2 D2 watches from a platform. I like to think that the hill is where Vader falls when he is mortally injured and the Emperor finds him - heck it's my cake so that IS the hill! 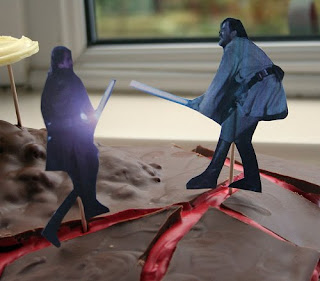 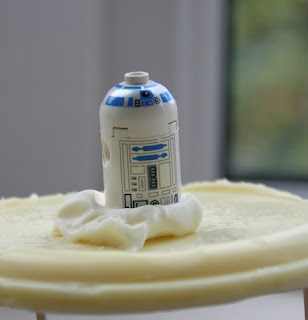 R2 watching from a platform (he is a Lego piece so needed the copious amounts of frosting to stand up!) 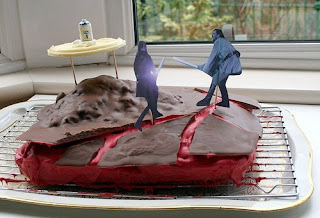 Another view of the cake. Matt is very pleased with it so thumbs up all round :) I got the idea from this very clever person - his version is better than mine!
Posted by Swirlyarts at 07:23

Well done you and a big pat on the back. It looks great, no wonder hubby is pleased - I wouldn't know where the hell to start with this cake. I'm going to be attempting a Pingu cake for my daughter's 2nd birthday next week - wish me luck.

Fantastic!!!! Will NOT be showing Samuel that cake as he will want one!!!!

that's soooo cool! Best not show my hubby or he'll remember I never made him a cake for his birthday! :)

The cake is fantastic! Such effort, I'm sure it'll be remembered for a long time - but what are you going to do for next year now! :)

How funny! Very well made and thought out though. Does it taste as good as it looks??