I have made an executive decision - I am my own boss after all! 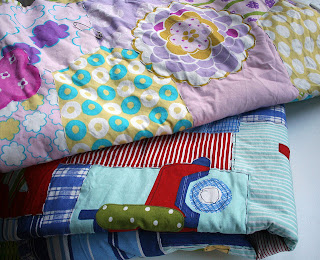 These quilts were due to be coming to Ilkley with me on Saturday (more about that tomorrow) but they aren't finished. The bottom one has all of it's hand quilting done but needs binding and the top one has half of it's quilting done and no binding. I would have to sew like a mad thing to get them finished in time and I'm just not going to get them done. So they are now not going to be coming with me but will be finished over half term instead ready for two fairs I have coming up in December (hopefully along with another few!)

I've decided that my time would be more wisely spent making some owl gift tags (as I have run out completely!) and some more 'one off' or limited edition chicken doorstops. So I don't have a picture of what I'm going to be doing in my Creative Space this morning but I do have a picture of what I won't be doing. That still counts right??
Posted by Swirlyarts at 09:30

Very sensible,if you rush you tend to get it wrong. They look very nice and they may go better in November as gifts for Christmas antway. Good luck, Veronica.

Of course it counts. Decision-making is part of the creative journey too! :)